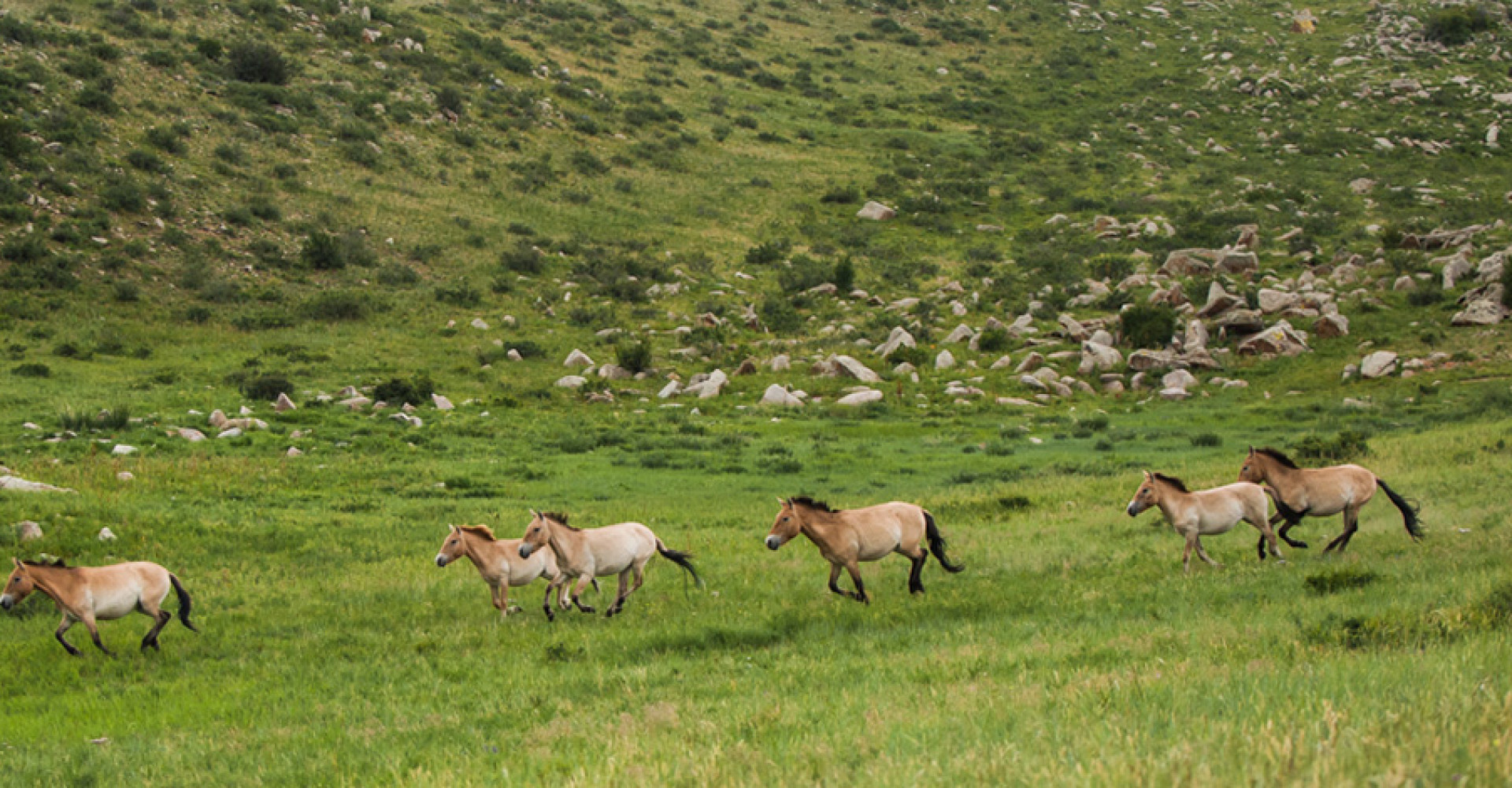 The Khustai National Park is world-famous for its successful reintroduction of Przewalski's Horse, Equus Przewalski, the only remaining wild horse, since 1992. In addition to the Takhi, as Mongolians call them, roaming freely in their homeland once again, the park and its surrounding area have much to offer to the lovers of nature and the culture of our beautiful country, located in the heartland of Asia. HNP is unique in that it is the only National Park that is managed by NGOs and financed by its income and does not receive any state subsidies. Therefore, HNP has developed a range of ecotourism initiatives to finance its conservation programs within the park. Incomes, earned through entrance fee, accommodation, souvenir sale, and donations, directly contribute to the Przewalski's Horse reintroduction program, as well as other research and conservation projects being undertaken within the park and its buffer zone.

Khustai National Park proudly presents the Przewalski’s horse, also known as Takhi, the only living wild horse and other wildlife. This unique horse was extinct in the wild around the late 1960s.

Thanks to a well-planned reintroduction program, in 2017 our Takhi number reached more than 300 in 34 breeding harems, and more than 95% of them were born in HNP. Because of this, HNP has the largest Takhi population in one area in the world.

Besides monitoring Takhi, wildlife and vegetation of HNP and its buffer zone, we are also conducting various research works with national and international universities and institutes.

The quality of the various ecosystems within the park assures abundant wildlife. Within the park, 55 mammals, 223 birds, 2 amphibians, 4 reptiles, 15 fish and over 500 insect species have been recorded. Many of these are mentioned in the Red List as endangered species such as the Przewalski's horse, Mongolian Gazelle, Red Deer, Roe Deer, Argali Sheep, Grey Wolf, Siberian Marmot, Lynx and many more.

There is a good chance you will be able to see many of the above-listed animals during your time HNP.

FLORA
Eighty-five species of lichen, 90 species of moss, 33 species of mushroom and 500 species of vascular plant have been recorded in HNP and its buffer zone. Among them, many medicinal, rare and endangered species grow here. HNP's forest occupies 1850 ha of land, belonging to the most western part of the Khentii Nuruu forest zone. The major species of trees are Birch Betula plathypylla, and Poplar Populus tremula.

«Flowers of Khustai» book, which includes 251 plant species, will help you know more about the flowers not only in HNP but all of Mongolia.

BIRDS
Most of the year HNP is an excellent place for observing birds, as many species are spectacular due to size, parity, numbers, and behavior. Notable is the number of large raptors like Black Vulture, Golden Eagle and several species of Falcons induing the highly valued Saker Falcon. Other birds include Demoiselle Crane, Great Bustard, Black Stork and many more can be seen in HNP.

«Birds of Khustai» book, which includes 203 species, will help you know more about the birds not only in HNP but all of Mongolia.

CULTURAL AND ARCHAEOLOGICAL SITES
Khustai National Park isn't just known for wildlife. Historically it has been a well-known area and was protected as a holy place for locals.

In HNP you can see many traces of ancient habitation. Some of the oldest are the many Neolithic tombs that dot the upper terraces and inner valleys of the Tuul River.

The most spectacular gravesite is the Ungot grave. About 1200-1400 years ago people of Turkic origin carved the gravestones in a way that man-like features can easily be recognized.

There are two main trails within our national park
Shorter trail: About 36 km long. Generally, you can see ample wildlife before the end of this trail. Animals you can expect to see include: Przewalski's Horse, Siberian Marmot, Red Deer, and various raptors.

Longer trail: About 80 km long. Along with seeing the above-mentioned wildlife, this trail passes an array of ancient historical monuments, such as rectangular tombs, sepultures. Ungot grave and Deer stone.