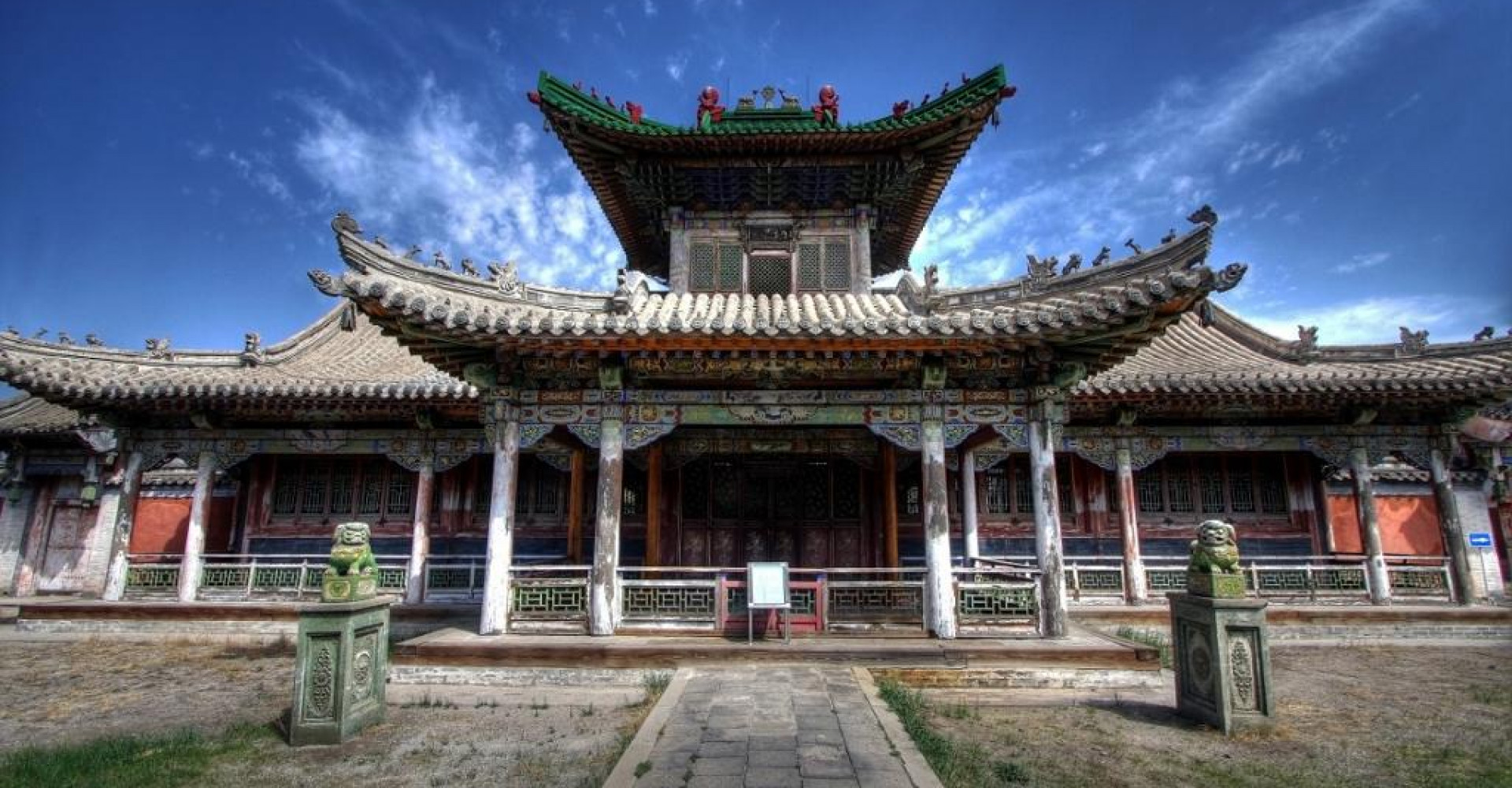 The complex was built between 1893 and 1903 named " Bilgiig hugjuulen badruulagch hlid’7 The temple of developing wisdom/ and dedicated to the 8-th Bogd Jivzundamba, the head of Mongolian religion.

On April 1, 1926, after Bogd khaan's death of illness in 1924, a state museum office was created and it was decided to transmit the remaining property of the Bogd khaan to public museum ownership.

We was converted to a museum building, displaying objects of historical and artistic value, religious idols,the royal collection of stuffed animals, and other items which had been owned or used by the Bogd Khaan.

Now the Bogd Khaan Palace Museum consists of seven Summer Prayer temples and the Winter palace, which was built in European style

The collections of the museum include unique and valuable objects related to Mongolia’s political, religious, and artistic history from the 17-th to early 20-th centuries: bronze castings, silk paintings, and papier mache icons made by well- known artists and artisans of the period, among others the first Bogd Zanabazar and his school; as well as objects owned and used by the eighth Bogd Jivzundamba and his wife Queen Dondogdulam, including royal clothing and equipment, gifts from domestic and foreign guests or representatives, and items purchased by the king for his own diversion.

YAMPAI.
The Yampai, or ‘‘protective gate”, was built at major temples which had been sanctioned by the Manchu emperor.This gate, located in front of the complex, is made of blue bricks and decorated with relief patterns.The top part, showing a pair of winding dragons, is decorated with powerful figures of mountains, water, and animals. The Yampai symbolically protects against attack by enemies, plunderers, or disease. 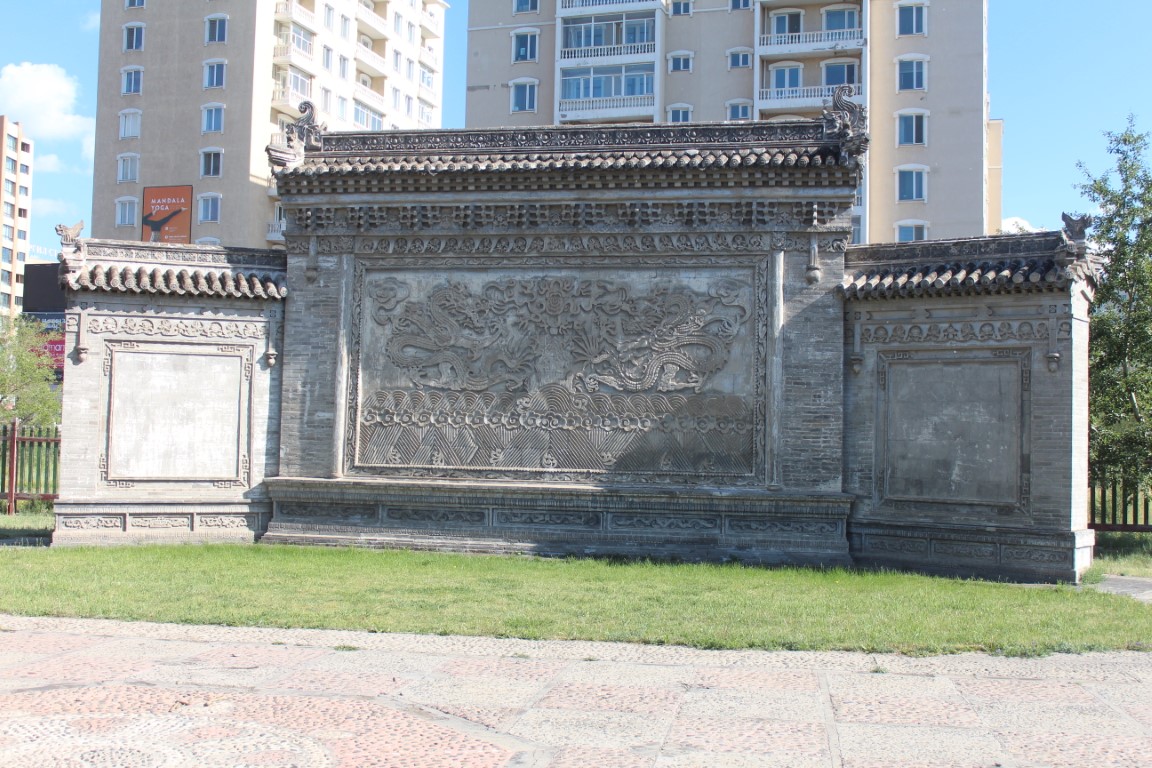 THE THREE OPEN GATES.
These gates symbolically provide an entrance to the palace grounds for all good and pleasant deeds, fortune and happiness. For this reason they remain doorless and permanently unobstructed. The Eighth Bogd Jivzundamba always entered by the central gate along with his close advisors, while provincial nobles and princes high- ranking lamas, and foreign guests entered by the east gate.The west gate was reserved for entry of the royal bodyguards and military band. 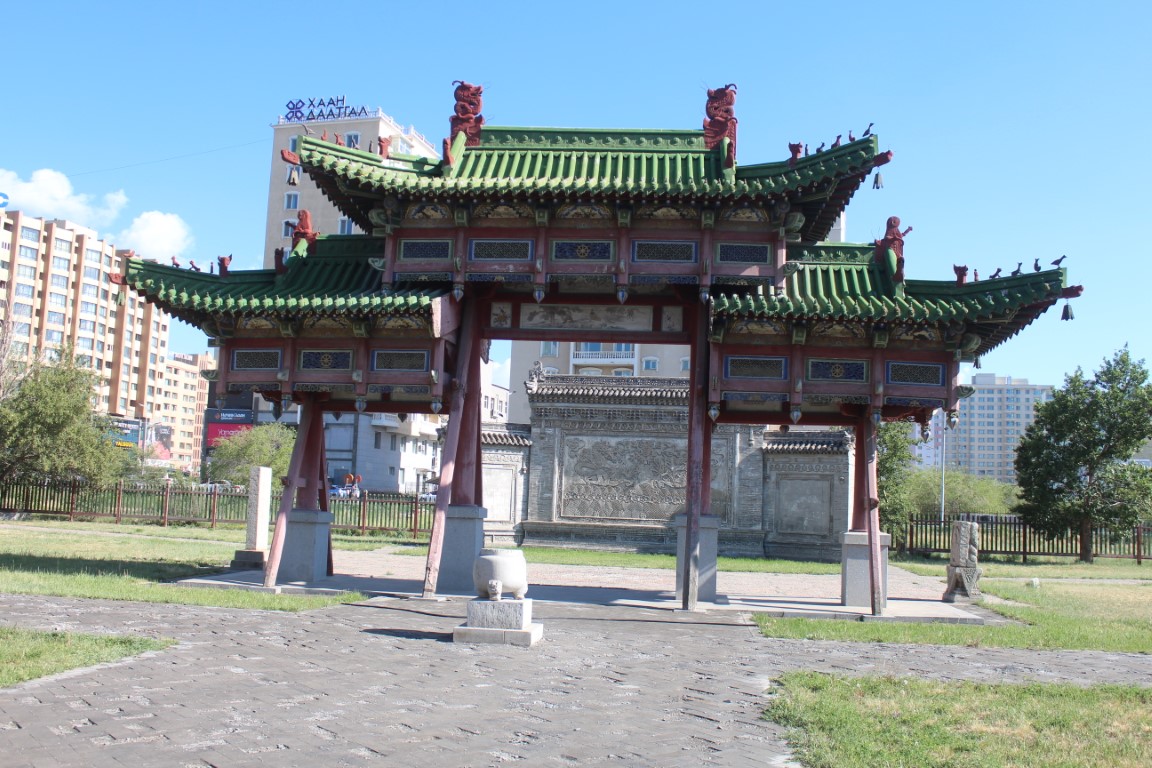 CHA - GAN.
The two posts standing in front of the Peace gate, to its left and right, are called “cha- gan” and used as flagposts. On the western post the state flag of Mongolia under the Bogd Khan’s rule was flown,while a yellow religious flag was flown on the eastern post. 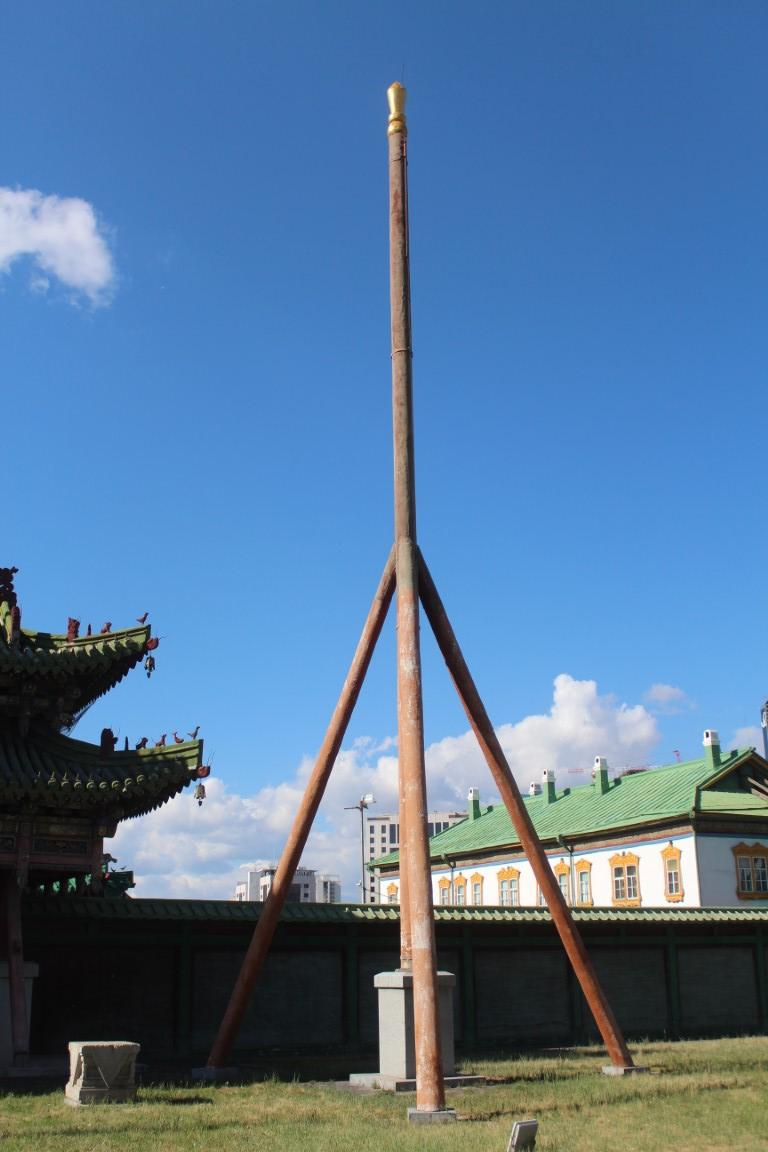 ANDI MEN /PEACE GATE/
This gate was constructed between 1912 and 1919 in commemoration of the eighth Bogd’s coronation as absolute monarch, following the victory of the Mongolian struggle for in-dependence from the Manchu empire at the end of 1911. It was designed and constructed by renowned architects, builders, blacksmiths and artists from across Mongolia, and built with funds collected from the public, equivalent to 280 thousand lan/1 Ian = 37 gr/ or 175 kg of silver. The gate has the unique characteristic of being constructed without a single nail, using instead 108 different forms of interlocking joints. Made up of eight supporting posts and a seventiered canopy, the gate is richly decorated with carved and painted symbols and images representing various aspects of Buddhist symbolism: paintings showing scenes from common Buddhist legends: the four “makhranz”, or protective deities. The decorations on the Peace Gate are characteristic of Mongolian art in the period of the Bogd Khaan. 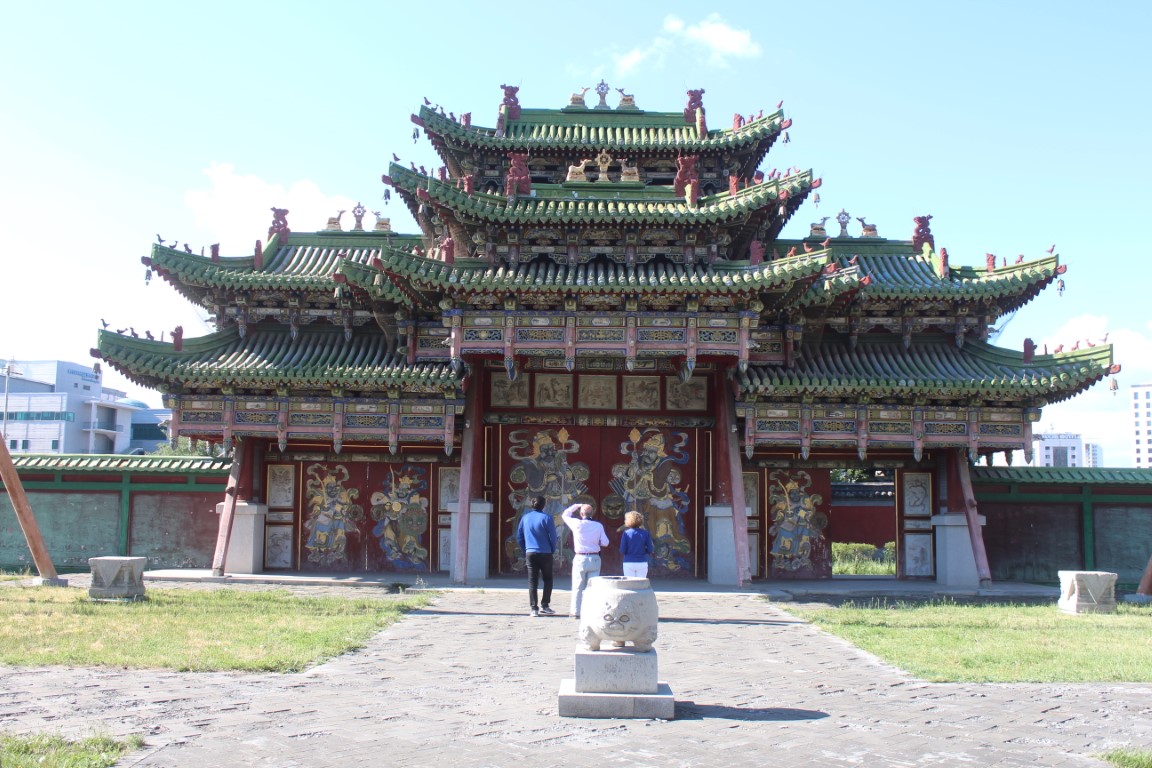 MAKHRANZ TEMPLE.
The blue wooden sign above the entrance to the temple, enframed with decorative golden dragons, reads “ Temple of developing Wisdom" in Sanskrit, Tibetan, Mongolian, Manchu, and Chinese scripts. The temple was built along with the papier- mache statues of the four Makhranz in 1893.
According to Buddhist legend, the center of the universe is located at Sumber Mountain, with the four wordly continents extending from its four sides. Each of the continents is protected from all seen and unseen dangers by one of the great protective kings.
Yolkhorsuren, / sa:Dhrtarastra / belonging to the eastern continent, is crystal white and carries a musical instrument, whose melody brings happiness.
Jamiisan, /sa :Virupaksa / protector against the earthly spirits, is coral- red and belongs to the western continent. In his left hand he holds a snake, while in his right hand he carries a stupa.
Pagjiibuu, / sa: Virudhaka / of the southern continent, is blue and protects against war and enemy attack, represented by the sword in his hand.
Namsrai, / sa: Vaisravana/, belonging to the northern continent, is golden yellow and holds in his left hand a white mouse coughing up precious jewels. He is believed to summon riches and good fortune.
Under the feet of the four wordly kings are shown the eight “ ignorant creatures”, being subjugated by the Makhranz. 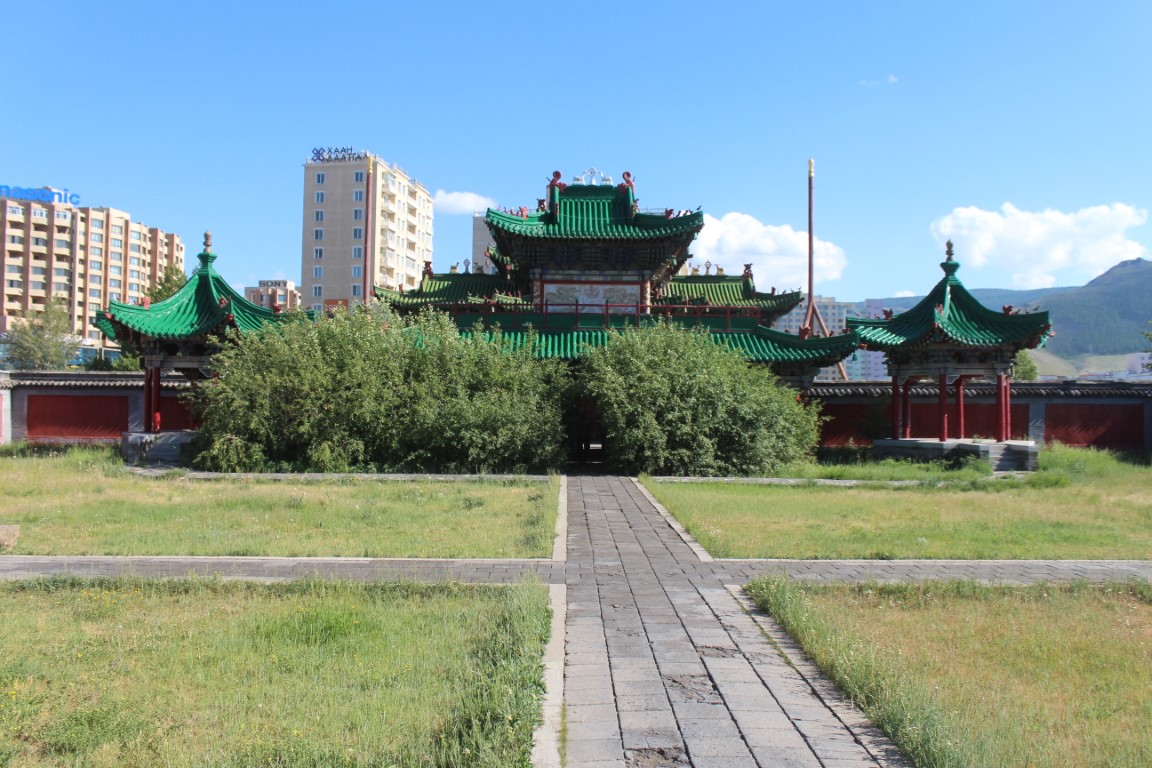 COOL PAVILIOM/ RAVSA/
Two types of great sacrificial ceremonies were performed each year at the Bogd’s palace, to appease the spirits of the earth and the sky. The bell and drum used in those ceremonies are kept in two small pavilions.

TEMPLE OF SILK EMBROIDERIES.
Approximately 130 artists and artisans were summoned to work here under the leadership of some of the most renowned artists from Khuree/ now Ulaanbaatar/, producing clothing for the king and queen, items for use in religious ceremonies, and other objects for the palace. In the 19-th and early 20-th centuries, Mongolian silk embroidery developed much more quickly than other art forms, bringing it to the same artistic level as the more traditional painting. There are several quite large and valuable examples of fine embroideries in the museum's collection.
24 women worked as embroiderers for the Bogd khaan, under the direction of well-known Khuree artists Tavkhai and Khasgombo. The applique works produced by these craftswomen are noticeable for their high artistic quality, as exemplified by their layout, color composition, and fine workmanship. The silk embroideries were created by having an outline image drawn, to which silk and brocade were applied.
The artistic works of this period generally depict scenes from religious texts about the Buddha, or the lives and portraits of saints. One special characteristic of these artworks is that while following the precise rules for Tibetan Buddhist art / canon /, they still manage to express the unique artistic spirit of the Mongols. 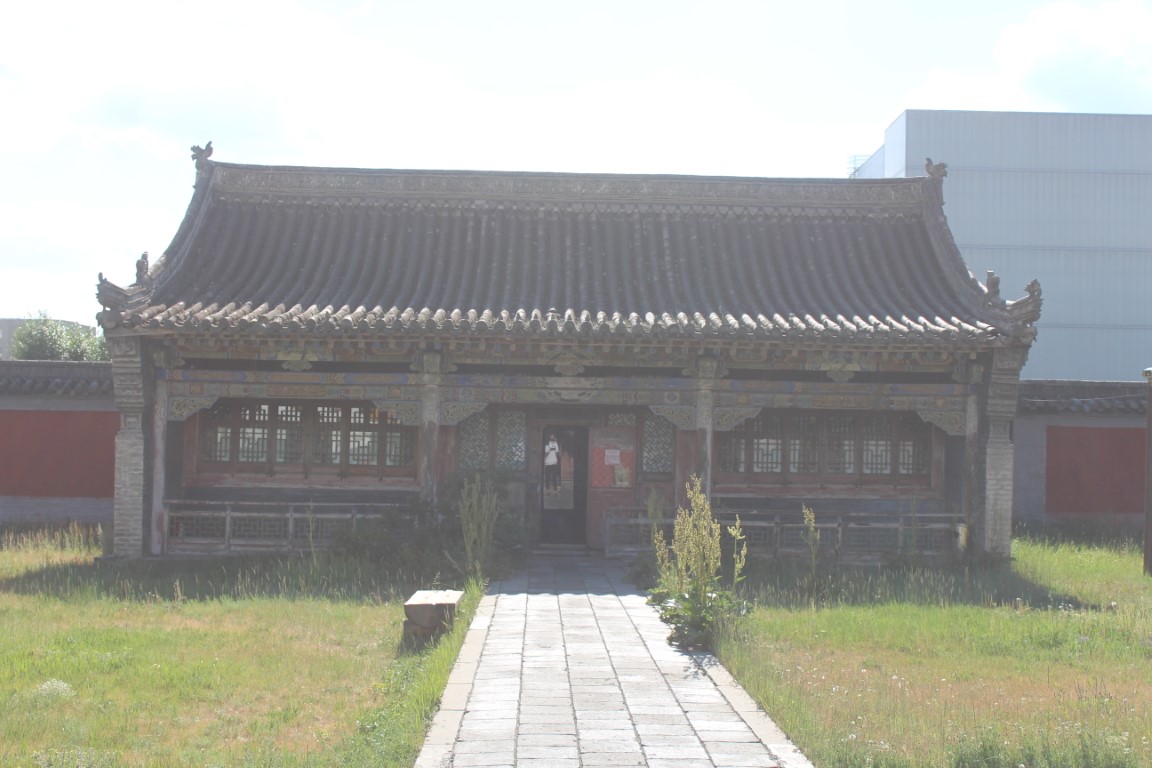 THANGKA ( RELIGIUOS PAINTING) TEMPLE.
Thangka paintings spread in Mongolia alongside the development of the “yellow faith" of Tibetan Buddhism. In creating the thangka painting, the artist was required to follow strict guidelines and perform necessary meditations.
The museum displays many outstanding works by artists of Ikh Khuree( present day- Ulaanbaatar) from the late 19-th and early 20-th centuries, including the well- known painters Jugder, Khasgombo, and Gendendamba and several unknown artists from the Ikh Khuree school.lt is unfortunate that it is impossible to identify these artists, as the rules of Thangka painting stipulate that the artist must not place his name on the finished work.
One important feature of the Mongolian thangka paintings is that the artists managed to show their individual artistic skills without breaking the fine guidelines of the Tibetan artistic style. Following ancient central Asian tradition, artists would prepare their own mineral paints by powdering, soaking, burning, or otherwise treating the materials. Mongolian paintings are typically drawn with bright and contrasting colors, hardly making use of subtler shades. 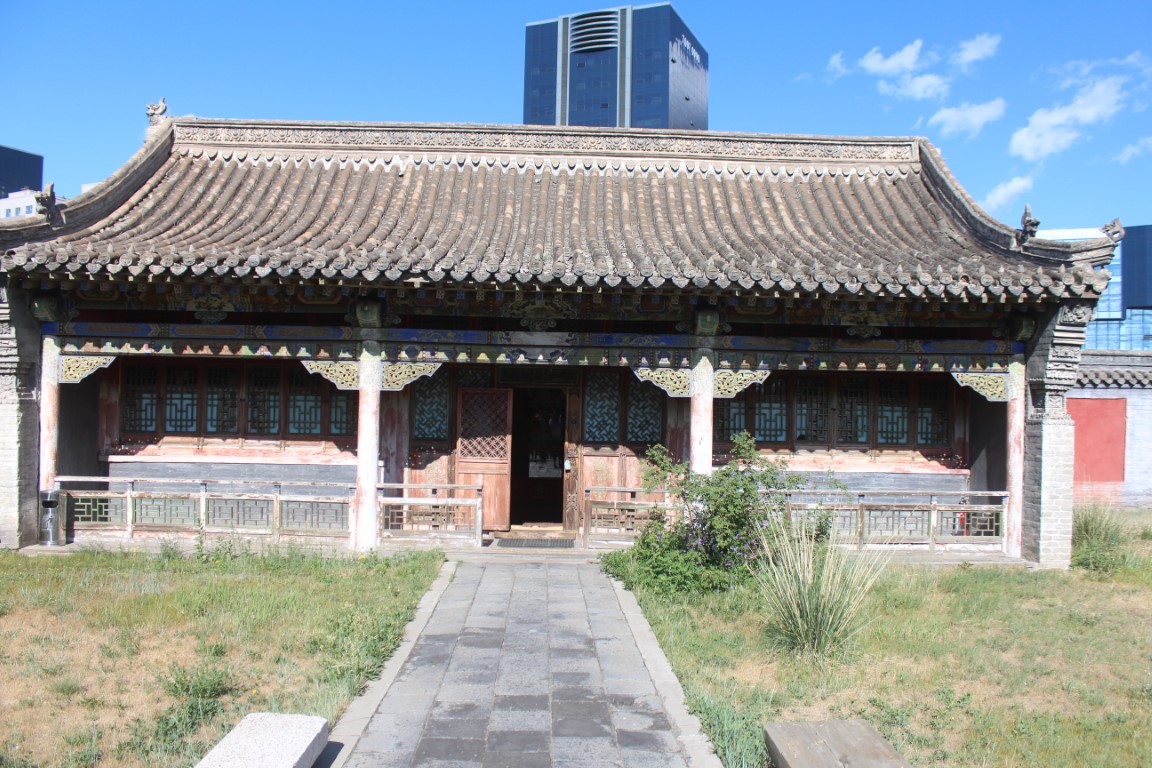 THE TEMPLE OF FAITH IN LEARNING.
This temple was given its name by the Manchu emperor. The sign bordered with golden dragons above the door of this temple reads in Manchu, Mongolian and Chinese. “ Jiv- zundamba Khutagt” followed by the name of the temple in the center, with the date “ August 1893” written on the left. In the last month of summer every year, sixteen lamas from Dech- ingalav school would be summoned to perform the Naidan- chog ceremony in the main section of this ceremony, to bring longevity to the Bogd.
The tiger tail to the northeast of the door was carried on journeys by the Bogd’s scouts for the purpose of dispersing evil and purifying the route. Statues of three deities devised for the long and successful life of the Bogd- Jugdernamjil, Ayush and the White Tara made in Dolonnur style. 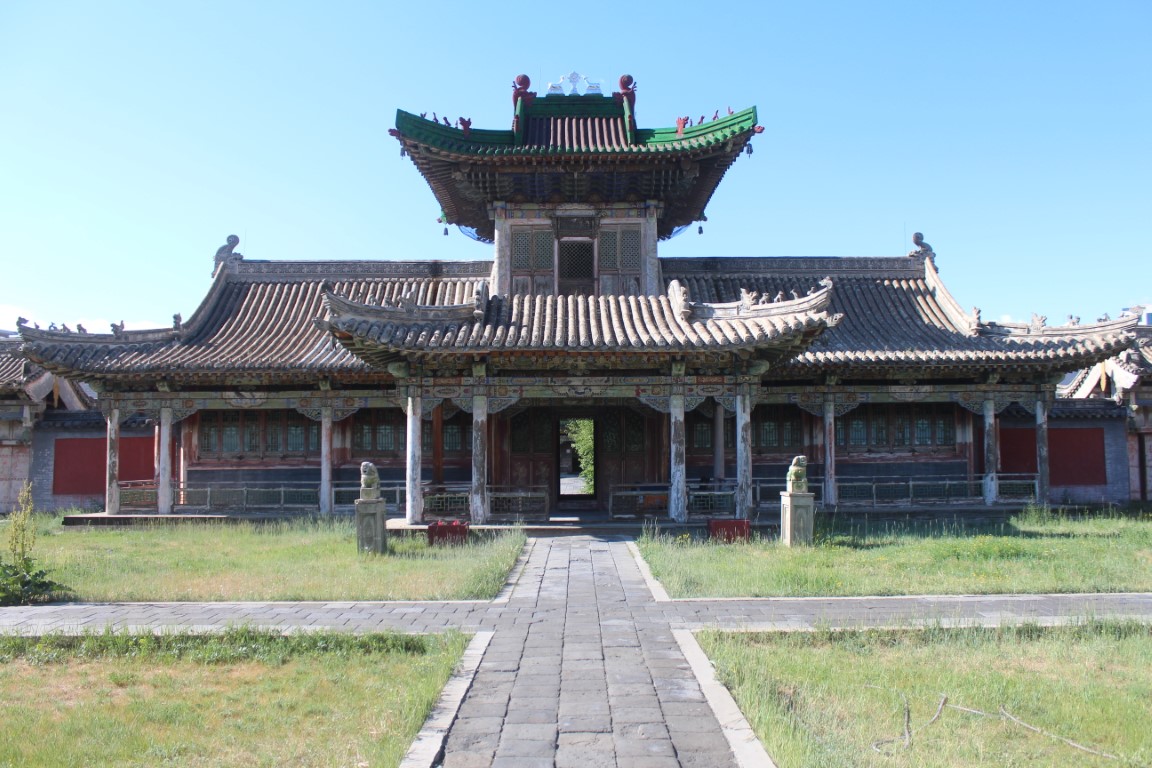 THE TEMPLE OF MANY DEITIES.
Now this temple is used for the display of deities represented by various means from the 19-th and early 20-th centuries..
In the center of the temple the 4-th Panchen Lama Chogloin- amjil’s portrait is on display. The fouth Panchen lama left behind many religious writings, which were studied by lamas seeking the degree of “gavj". The eight Bogd Jivzundamba had himself attained the degree of “ gavj"and worshipped the fourth Panchen lama as his own teacher.
Here shows impressive artistic sculptures of wood carving made by the famous master Balgan and items of papier - mache made by unknown masters of Ikh Khuree late XIX - beginning XX-lh centuries. 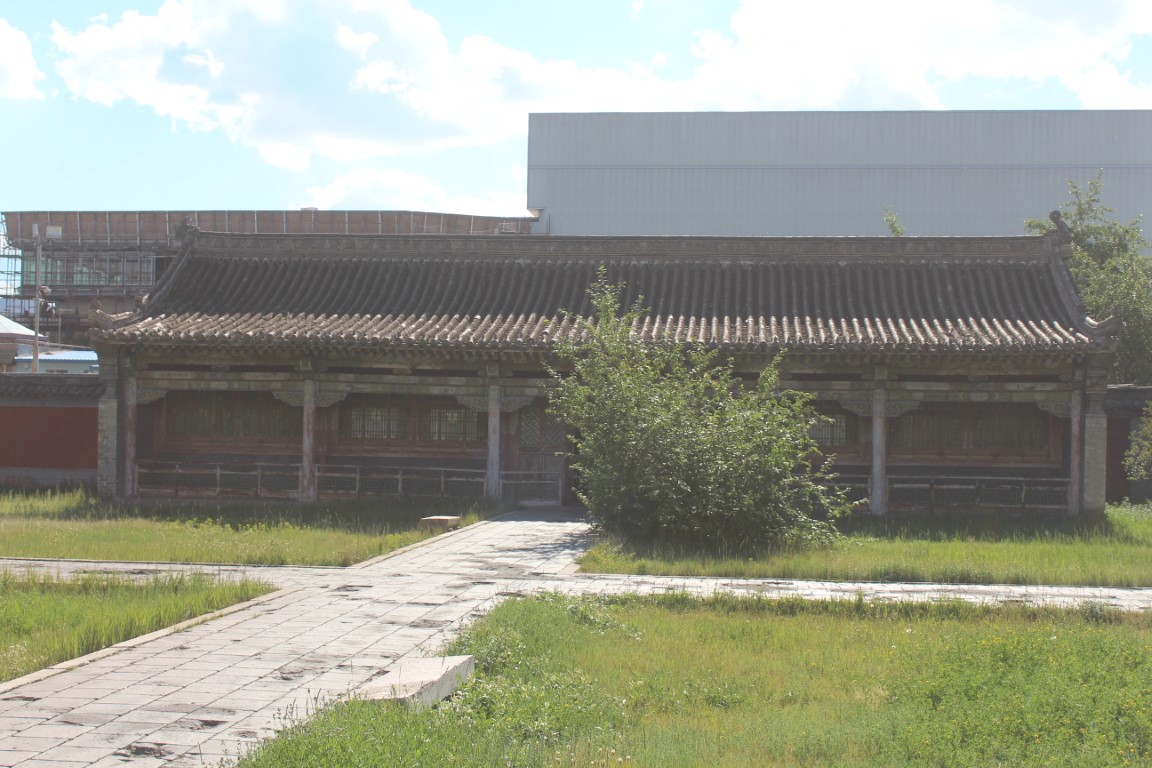 THE LIBRARY.
In the Bogd’s time in this temple were many volumes of Mongolian, Tibetan, Sanskrit, Manchu, and Chinese sutras.Today most of the sutras are kept in the State Central Library. Some of the remaining sutras, printing blocks, clay icons designed for gen-eral use, and brass casts are on display. 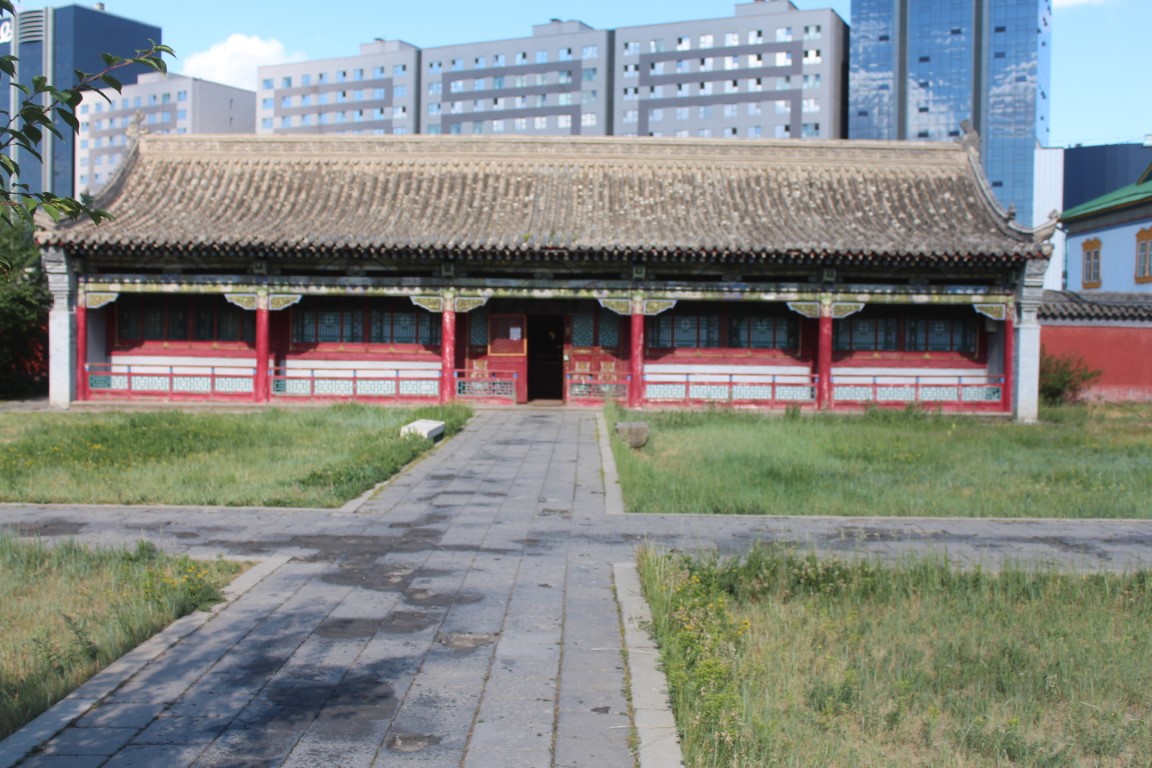 LAVRIM TEMPLE.
This temple housed the Ylll Bogd’s main religious icons and in the summer was used for conducting prayer and meditation.
G.Zanabazar (1635- 1723).
The first Bogd of Mongolia, Undur Gegeen Zanabazar (the “great enlightened’’) was born in 1635 as the son of Khalkh Tusheet khan Gombodorj, a de¬scendant of Chinggis’s Golden Horde. Popularly known as “ Undur Gegee" or “ High Enlightened", Zanabazar became an influential figure in the historical, social, po¬litical and religious activities of his time. When he was four years old, the four Khalkh kings met and decided that the leader of the yellow faith, the Bogd saint Jivzund- amba, should be incarnated in his first form. Zanabazar went to Tibet when he was very young and, having obtained religious knowledge and returned to the Khalkh country, was identified as the reincarnation of the Tibetan Jivzundarnat. In 1686 he created the “ soyombo" alphabet. Zanabazar was, in addition to being a philosopher, politician, and representative of the yellow faith, a highly accomplished painter and sculptor. In the Lavrin temple are situated, beginning with the Green Tara, the twenty- one Taras (goddenes) sculpted by Zanabazar with his own hands.
Zanabazar was the famous Mongolian sculptor and consummate master. His sculptures are distinguaged for its craftsmanship, plasticity and composition. Although being ecclesiastic,
Zanabazar followed canons of Buddhist iconography, he nevertheless succeeded to breathe life into his works, get over the fixed convention of canons and founded Mongolian school of Buddhist art.
It is clear that Zanabazar is a leading figure in the 17-th and 18-th century art not only of Mongolia, but of the Orient as a whole. 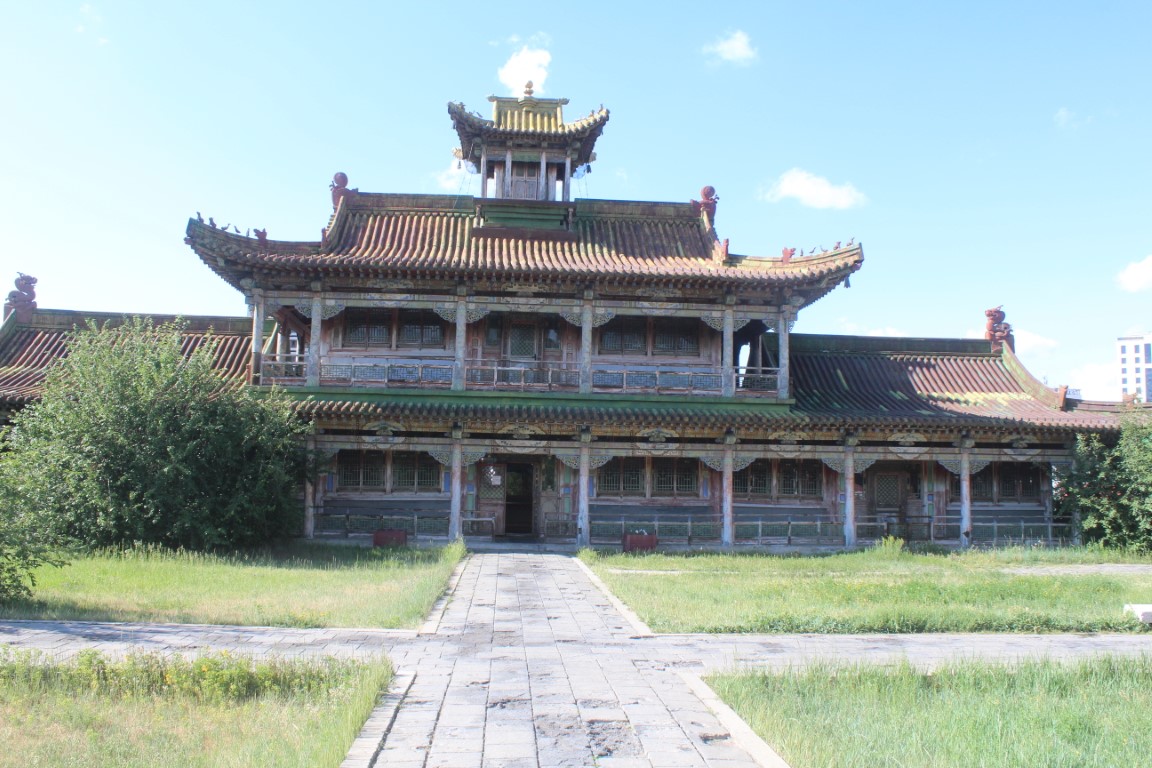 WINTER PALACE.
The Winter Palace of the Ylll Bogd Jivzundamba was constructed as a two- storey European- style building, based on the design of an architect from Tsarist Russia. The Manchu Emperor accused the Mongolians of constructing their palace in the style of a competing faith, so Buddhist ornaments were added to the roof and lotus patterns painted onto the walls, to make the palace look more like a Buddhist temple. The Ylll Bogd Khaan spent 20 winters in this building. 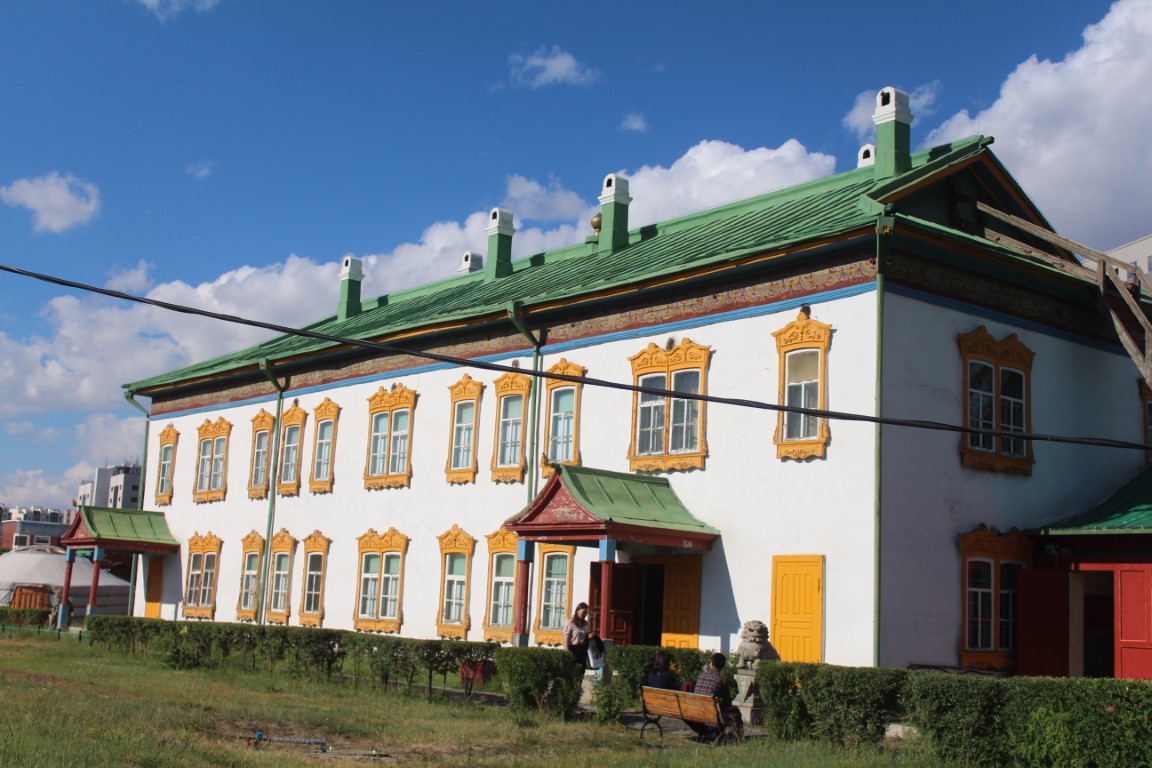