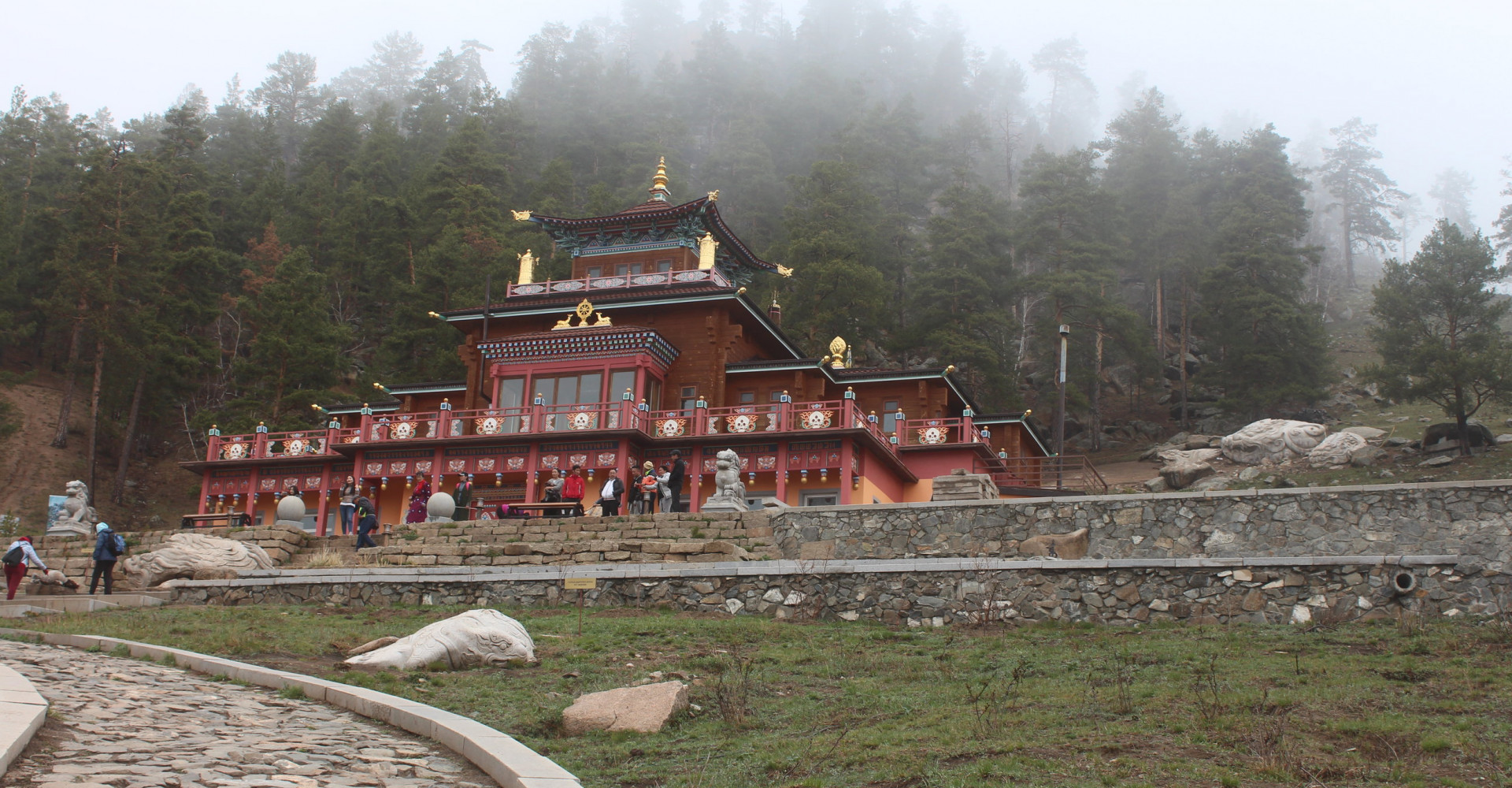 This meditation center was built by Buddhist artist and lama G.Purevbat to practice meditation, educate oneself and write books. It is located 100 kilometers northwest of Ulaanbaatar and approximately 16 kilometers west of Bornuur soum in Tuv Province, at the foot of Daliin Khavtsal Mountain, a stunning mountain with larch forest.

As you follow a hiking trail and arrive at the temple, you will notice blue, white, and orange colored stupas, which represents the three most sacred deities worshipped in Mongolia. Blue color represents the Ochirvaani deity whose role is to protect the Mongolian land and people, white color represents the Janraisag deity who protects people from all sufferings and danger, and orange represents Manzushir deity who honors the mind. The stupas were made using the unique formation of rocks and stones just like the animals from Buddhist legends.

You will see a Garida at the gate protecting the monastery as well as Gecko and Scorpion statues on a giant boulder inside the monastery. G.Purevbat made up fairy tales about the animals and statues in the temple. He used his collections of nature’s unique shaped rocks, tree roots, and other unique things to sculpt these animals he first saw in his meditation dreams.

On the second floor of the temple, there is a museum called Strange Things displaying G.Purevbat’s collections of unique and rare animal artifacts. For example, there is an anaconda’s skin, giant crocodile’s skin, a skull of a “unicorn”, four-horned ram, six-horned antelopes, one-horned mountain goat, six-horned pig, and five-headed fish with their description of where they were found.

After visiting the temple and the museum, travelers can hike along the hiking trails where they can see peculiar shaped natural rocks and trees.

Meditation Temple
A tree - stored main temple with main worship of Sukhavati (Land of Ultimate Bliss) enshrined, meditation and mantra chanting and Buddhist rituals performed. The upper floor enshrines Land of Assembly  of Je Tsonkhapa and yidam deities. The number of players and pilgrims, who visit the Meditation temple is increasing day by day… 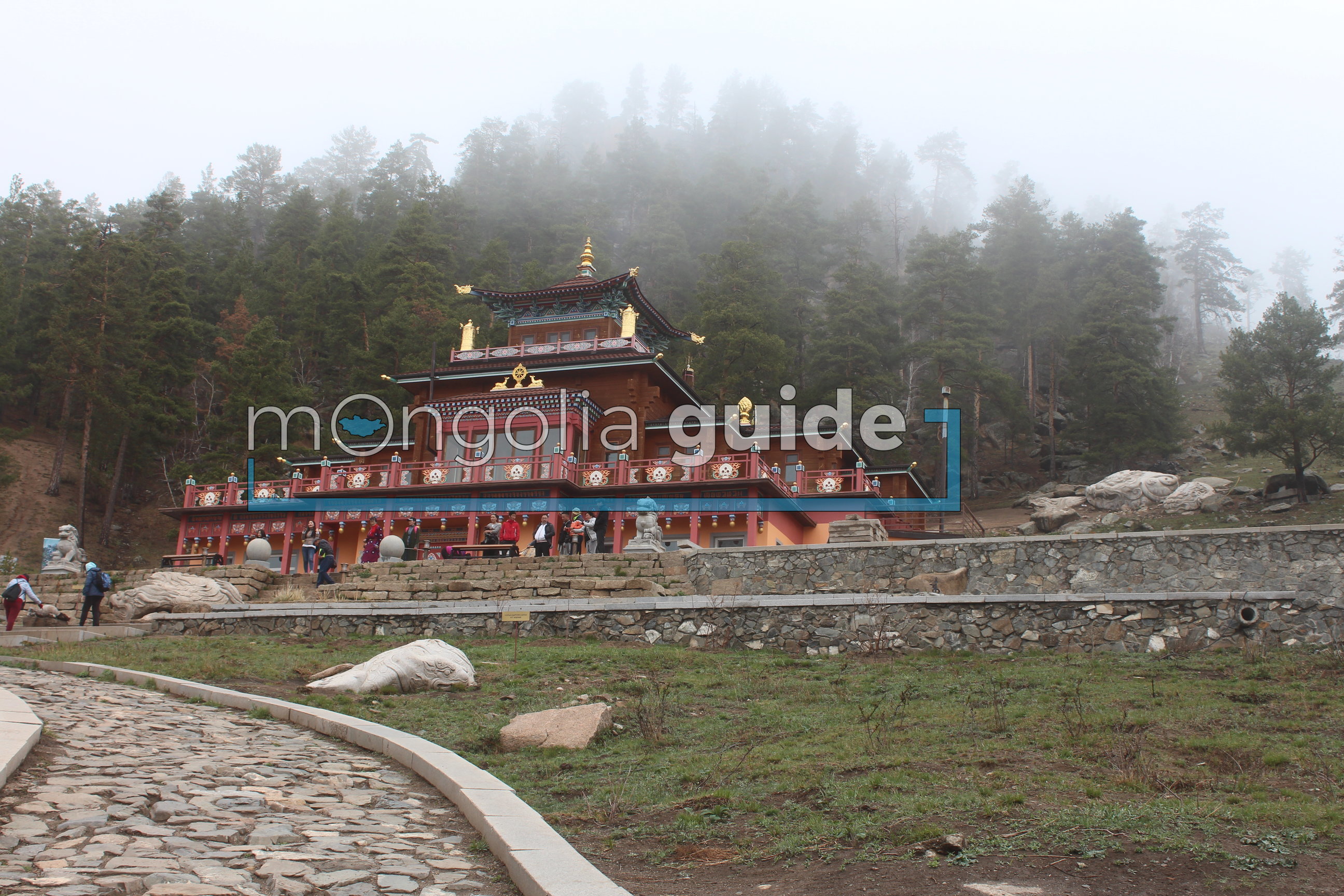 Sacred tree
In the north side of the temple, there is a tree with dead trunk, yet another new trunk grown from a front branch of the tree as revival. There’s a giant table-like rock in front beneath of this tree. On top of the dries trunk, a golden Chintamani  (Wish-fulfilling Jewel) is exalted and ritual of protection was performed. Pay respect, offer ambrosia and offer a prayer that ‘May all living beings long live without the suffering of illnesses.’ 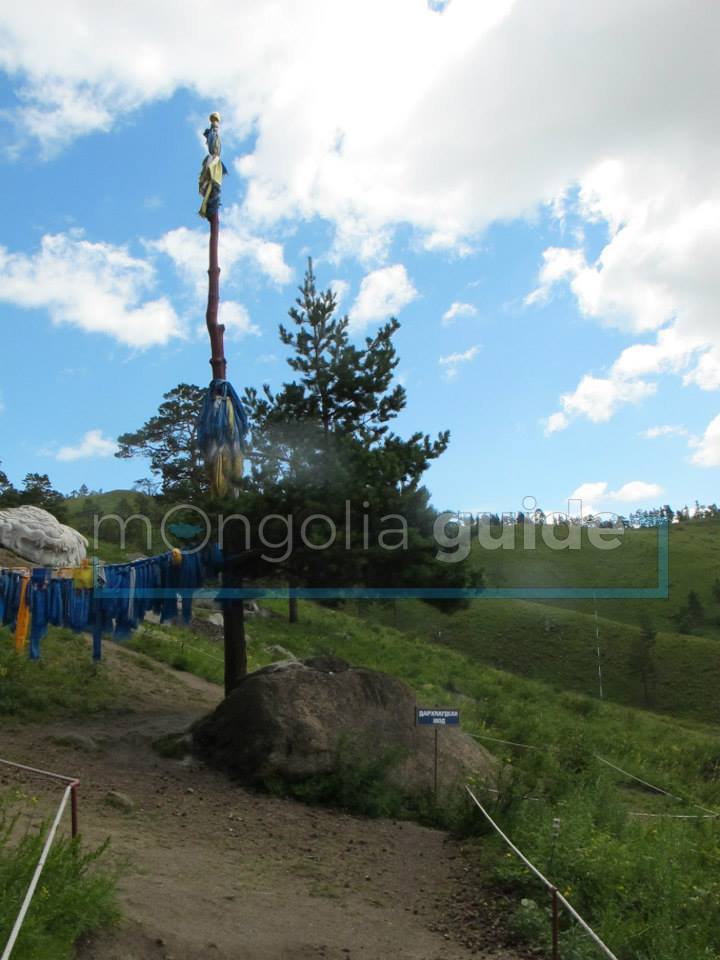 Ingot Rock
An ingot-shaped monolith on the circumambulation path. The rock is so steep that one can’t ascend bu climbing. On top, it’s capped with turf and a small pine tree grown. Upon this plateau of the Ingot Rock, a Treasury Bumpa (Vase ) with offerings of wealth prosperty is established in front of which Yellow  Jambhala or Vaishravana (Deity of wealth and prosperity) is created. There are stone ‘ Jewels-spitting mongoose’ (Ne’ule), as well as a Stone Sheepback an offering to this Ingot Rock. While circumambulating the Ingot Rock in sunwise direction offer a prayer that ‘May for all living beings, the impoverishment be eliminated  and the wealth and prosperity be flourishing’. 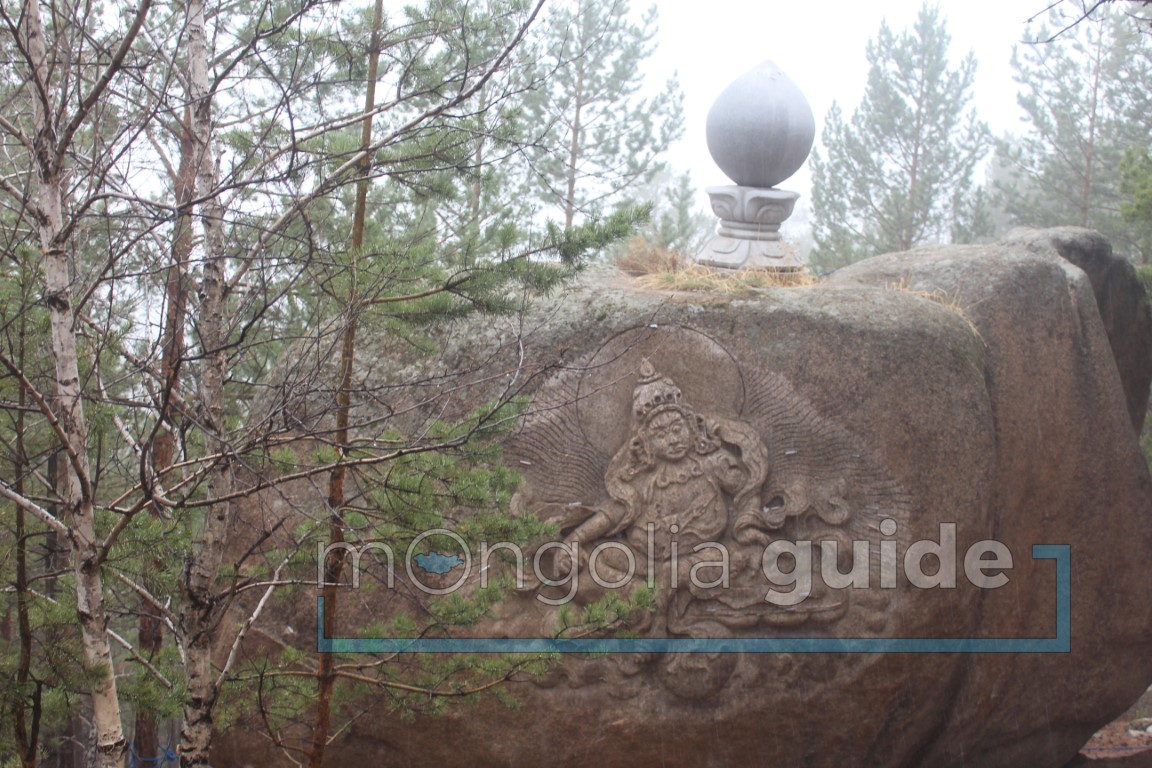 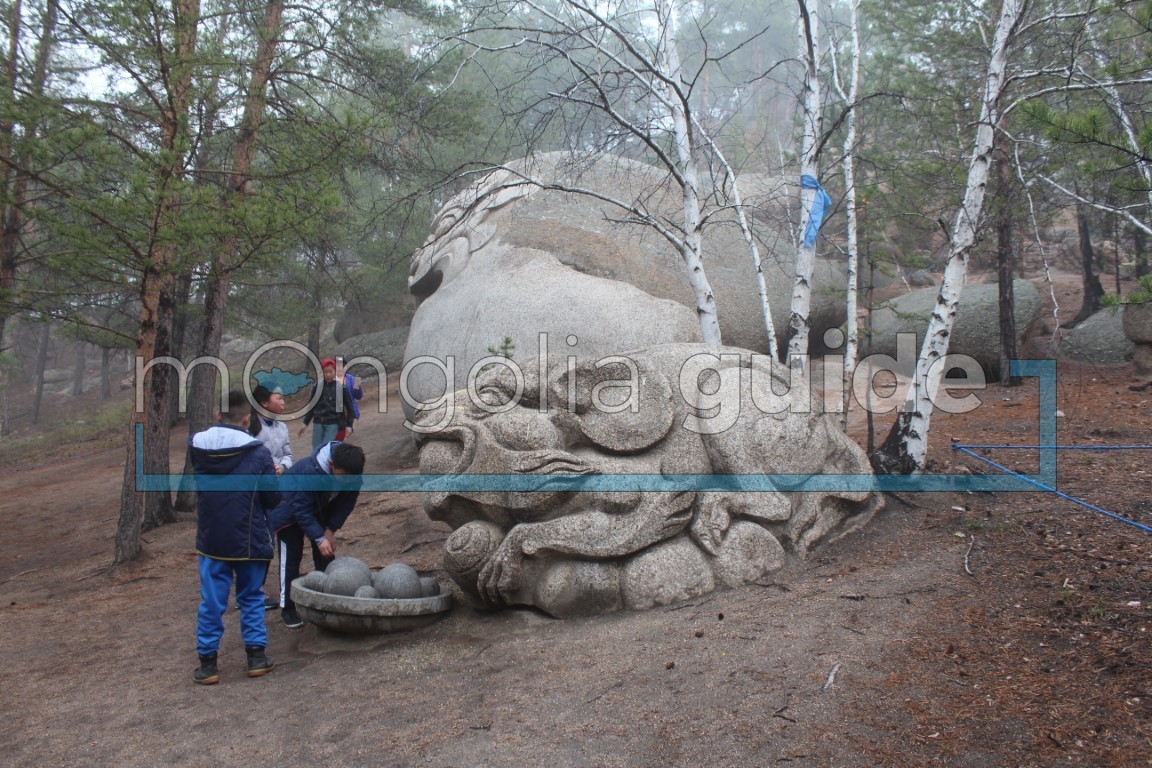 The Temple for Buddha’s Descending from the Heaven
On the circumambulation  path, there is a temple with double-stored tented golden roof on top of the towering cliff. Inside the temple, there are a stupa and a Mongolia-style iconic painting that both illustrate the Buddha;s descending from the Trayatrimsa Heaven (Land of thirty-three gods). A stupa with steps in four directions was created by pilgrims at the time when Buddha after attending his mother in the Trayatrimsa heaven, descended to Jampudvipa, in order to cease the acts of monks and sravakas  who were accumulating abundant wealth during his absence. It demonstrates one of Twelve Deeds of Shakyamuni Buddha’s Life – Descending from the Heaven. 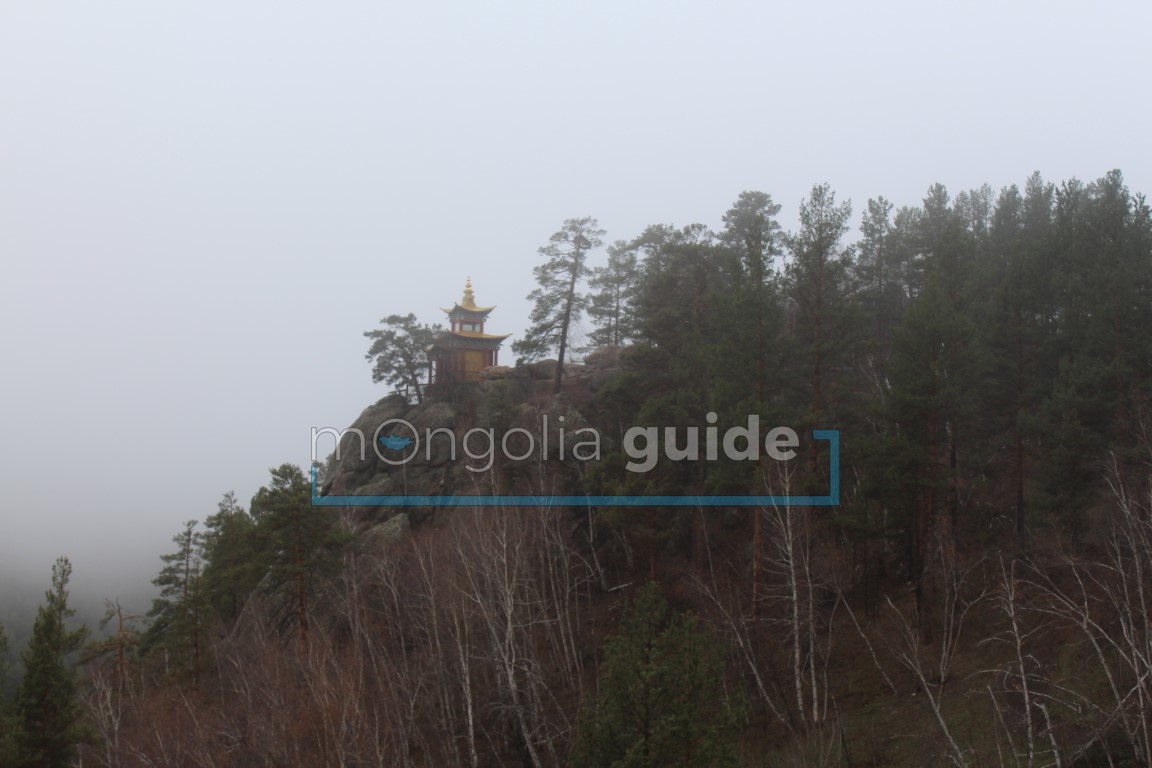